Home » Latest News » Meet “The Venus Project”: The people who are preparing for the day when money will be meaningless

The Venus Project supporters envision a world of abundance where automation eliminates almost all jobs and all citizen’s needs are free. You can call them dreamers or socialists, but you should also listen to their critique of the existing economic system.

90 years have passed since the mad scientist Rotwang from the futuristic film Metropolis invented a robot to replace a human being, and all the people of the city rebelled against him and killed him, but today too many seem to share the great concern expressed by the director and screenwriter Fritz Lang in that film. True, no one gets up in the morning in fear of being dismissed and replaced by a robot. But are we too complacent? After all, this process is already here.

Perhaps rather than fearing a future without work, we should welcome the changes it will bring. According to The Venus Project, a social organization which is calling for a reexamination of the social systems and updating them according to the knowledge accumulated since their establishment. “We are working today with economic and social systems that are more than 200 years old – like capitalism, democracy and British law, but in these 200 years human knowledge has multiplied dozens of times, and these systems have barely been updated,” explains Jonathan Gan-Mor, the organization’s speaker in Israel.

One of the basic ideas of the organization is a transition from a scarcity-based economy, which is now practiced in most of the world, to an abundance-based economy. Gan Mor explains: “If it was raining gold outside, everyone would run and collect the gold, but if the rain lasted for three years, people would sweep the gold from their houses – it would be worthless. In a state of abundance, products have no monetary value and can not be made profitable. Today, the means of production allow us to produce in such quantities that the products will be like that gold – that is, abundance can be achieved in almost every field. But the current economic system is wasting a lot of resources and causing a lot of pollution.”

The organization founder, Jacque Fresco, was an industrial designer and futurologist who defined himself as a “social engineer”. He was born in New York in 1916, and in the economic crisis of 1929 he was a young boy. He saw people standing in line for bread and work, and on the other hand – empty factories and shops with products which no one has the money to buy. “It made him realize that something was not working”, says Gan Mor. “There are people, there are products, there are means of production – but no money. This led him to think deeply and develop the system of The Venus Project: a Resource-Based Economy.”

What is a Resource-Based Economy (RBE)?

“This is an economic system that represents a conceptual shift from a situation in which we think we are building things through money, to a situation where we understand that in order to build and manufacture anything – resources and technological knowledge are needed. If I have wood, tools and know-how, I can build a table without money, but if I’m on the moon, and I have no resources, but I have a suitcase with a million dollars – I can not build a table”.

Fresco spread his ideas through films, books and lectures, and also set up models for the futuristic city he envisioned at the Venus Project Center he built in Florida. “In the 1980’s, ten buildings were built there on relatively cheap land,” says Gan Mor. “In Florida they have models of residential buildings, transportation and agriculture in the future city. They took a remote and empty area and turned it into a beautiful jungle, built everything with a very low budget, without professionals. Tours are held once a week in Venus, Florida. Fresco did the tours himself until he passed away last May, at the age of 101”. 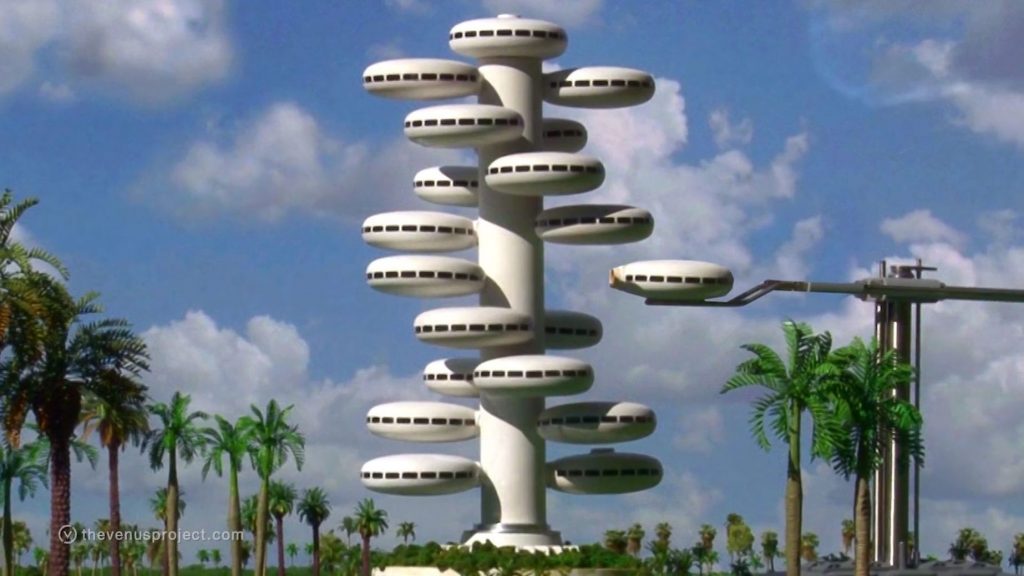 How did it get to Israel?

“In 2008, following the financial crisis, many protest movements were established around the world, and then the project received a lot of exposure. After we started promoting the project in Israel, we held talks with Fresco in Skype. The protest of summer 2011 (the biggest social protest in Israel’s history) gave us a serious boost. The core volunteers of the Israeli team have worked very hard since then to bring the project to as many ears as possible.

“Right now we are at the stage of introducing our ideas to the public discourse. We give lectures in High Schools, Young leadership schools, youth movements and educational seminars as well. We manufacture and distribute video content and lectures. We also translate materials to make them more accessible to the Israeli public. We had seminars of more than 20 sessions in which we got into the thick of things”.

Gan Mor, 31, holds a B.A. in economics from Tel Aviv University, and before joining the Israeli team of the project he worked for a number of companies dealing with bonds, currency and commodities. “I managed investment portfolios by the millions, followed stocks and read economic newspapers on a daily basis for many years”, he says, “and found no basis for the assumption regarding to scarcity on which the whole modern global economy is based, the assumption that ‘human desires are endless, while the world’s resources are limited’. This hypothesis, he states, doesn’t reflect the current economic reality: “Until the Industrial Revolution, the main problem of the economy was how to produce more. There was an authentic scarcity (unlike artificial scarcity), because all production was based on manual labor. But since then the means of production have changed enormously. From a situation where almost everyone is engaged in agriculture, we have moved to a situation in which almost nobody is engaged in agriculture – and we still have more food than ever.

“We began to create the scarcity for ourselves so that the system could continue to work. One way to do this is to destroy the products. A second way is to create a limited amount of product in advance (limited editions). The third way is planned obsolescence – producing a product with a predetermined lifetime (which will be destroyed faster), which will cause the consumer to consume more often.”

What needs to be changed?

“We need another operating system. In Thailand, for example, there is a manual laundry service that operate by manual washers. If the owner of the laundromat bought a washing machine, he would fire the washers. But what happened in the 1950’s when we started having washing machines in our houses? We were not hurt. On the contrary, if I have a washing machine, I work less hard at home. The Venus Project offers an economic system more like the one we use at home. Instead of firing all the washers because of the new machine – they will simply work less”.

Why should people work in the future?

“We propose a comprehensive approach that includes not only a new economy but also a new society with new values. For example, the education system must change. Today, it is not suitable for most children. I’m making a living as a private math teacher for high school students, and I when ask them about their favorite subjects the usual answer is: sports, free period and recess. When I had students in first grade, they would answer a variety of answers, because their curiosity and their desire to learn had not yet been erased. So maybe human nature is to want to learn? People assume that human nature is either lazy or covetous, but it is actually the nature of the system in which we live in.”

The Venus project is not afraid of automation in the labor market. “Automation will replace all technical work, and then people will have more leisure, and there will be free music centers, free cultural centers, free sports centers, a free university” says Gan-Mor, and recalls the existing model of a public library: “Just as a book can be borrowed in the library, read and returned, in the same way we will use access centers where products and services will be made available to the public. In such a method you have ten times more items available without producing even one more”.

These ideas may sound utopian, even naive, but Gan-Mor emphasizes they are backed by a well-planned and achievable plan. “The changes we propose are intellectual first (changing the way we think), and those changes have to be made as a society,” he says. “We propose to start with a small research center – a city of about 30,000 residents, which will examine automatic production systems and services to the public, such as public transportation systems, etc. It will be possible to invite leaders from around the world to come and be exposed to the ideas and perhaps establish such cities in their own countries – and it will spread from there”.

Why not turn to people who have the means to start such a system?

“We want to reach these people, but it’s hard because we don’t have the right connections or enough money, so we’re trying to increase the community, because as it get bigger and stronger, the more powerful members of society will pay attention. Most of the social changes that have occurred in the last 150 years – black’s rights, women’s rights, children’s rights, the LGBT struggle – they all started from having a cultural infrastructure. They had to prepare the public, create a social coalition. You can not change society by yourself. “ 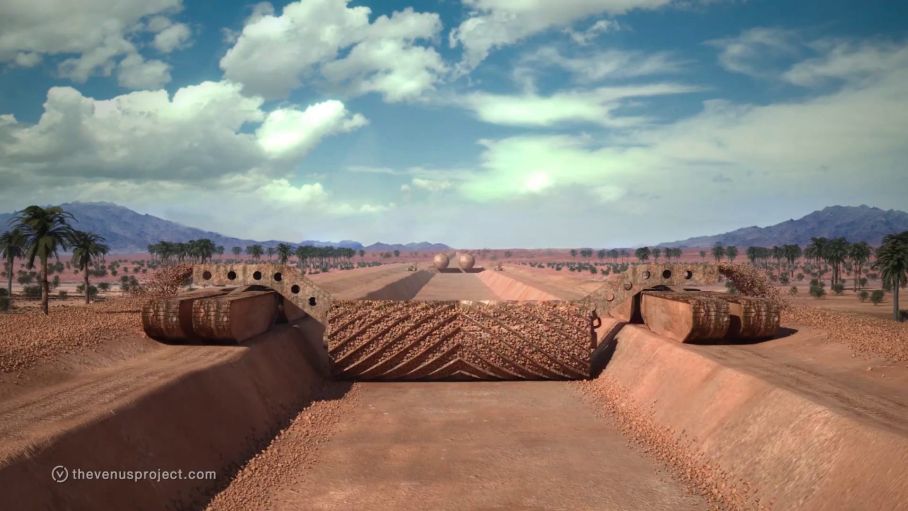 How will humanity progress without an economic incentive?

In our society, prime ministers and ministers of economy and finance are dealing with the question of ‘How do we create jobs?’ The question should be: ‘How do we produce products and distribute them effectively?’ Jobs were means to reach a certain goal in the past, before automation. We need to renew our thinking about all these concepts due to all the new information, and the new possibilities that have opened up to us in the modern era”.