Home » Resource Based Economy » Environment » Cities in the Sea

A global network of such cities in the sea can easily accommodate many millions of people and relieve the land based population pressures. They can provide the inhabitants with information and serve as natural sea aquariums without artificially enclosing marine life. 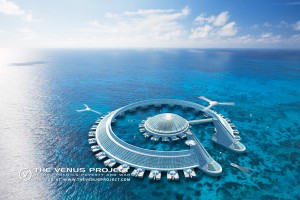 Many of these cities may serve as oceanographic universities that maintain the ecological balance of marine systems. Other ocean cities will maintain sea farms that will cultivate many forms of marine life. They could also be used as a new resource for mining the relatively untapped resources of the oceans without disturbing its ecology. Still others may monitor and maintain environmental equilibrium and reclaim dangerous radioactive and other pollutant materials that have been dumped into the sea.

After construction, these structures can be towed to various locations where they would be most beneficial, then anchored to the ocean floor. Some structures will be towed in prefabricated segments and then joined together at selected locations. Their internal construction will include floatation chambers which will render them practically unsinkable. They can be self maintained and fully automated. 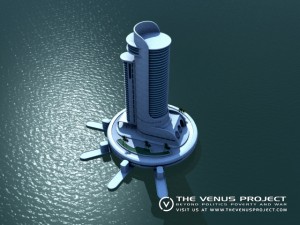 Living in an offshore skyscraper.

Offshore apartment buildings of concrete, steel, glass, titanium, and a wide variety of new synthetic materials could be built to relieve the population pressure in areas like Hong Kong, Tokyo, Los Angeles, and New York. The materials used in such projects would be engineered to withstand the corrosive effects of the harsh ocean environment.

Such systems would be used to cultivate and raise fish and other forms of marine life to help meet the nutritional needs of the world’s people. 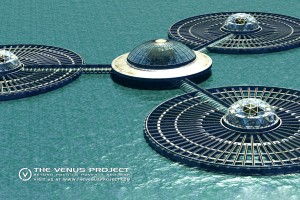 Capable of cultivating a great variety of marine life, these structures would be equipped to permit the free flow of water throughout the system. They are designed to be a non-contaminating, integral part of the marine environment.

Eventually, with applied total design concepts and mega-hydrological projects, we could minimize the threat of floods and drought. These waterways would be an integrated part of a national flood control system that would hold back floodwaters, which could be released during periods of drought, and be used to maintain the water table. It could also be used for irrigation, shipping passengers and bulk freight; and the water storage basins could be used for recreation as well. In many instances, the waterway would be used as evaporative desalinization.