At 86, Jacque Fresco doesn’t dwell on the past. He works single-mindedly on the future — his vision of the future, that is.

And if you’re having a bad day, that future is going to sound good.

In Fresco’s world all countries share their resources; all manual about is done by machine; there is no poverty, hunger or war; there is no government or need for money; adults work only three days a week; everyone gets to pursue their personal interests.

Fresco, by turns futurist, author, inventor, philosopher and dreamer, has been working toward that place he calls “The Venus project” for all of his storied life. Why man needs to get to this new plain and how to get there is detailed in his new book, The Best That Money Can’t Buy — Beyond Politics Poverty & War (Phenix & Phenix Books, $24.95),

“The way we’re going, one day we’ll all be in an unliveable, toxic place,” Fresco says. “We have nuclear bombs to level the world several dozen times. With the money it took to make them, we could have built so many universities and schools and healthcare centres and helped people live so well they need not struggle ever again. There’s something dreadfully wrong.” 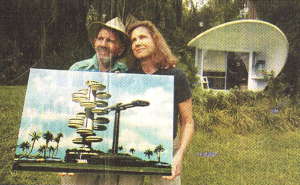 Jacque Fresco and Roxanne Meadows hold out hope to build a $50 million prototype city like the one shown in an artist’s rendering.

From his 25-acre spread in Central Florida, with dotted with dome-shaped buildings of concrete, steel and fibreglass that look like the Jetsons’ vacation ranch, Fresco has not given up his dream of building a $50 million prototype city in which all human needs are met by technology, doing away with the need for money or the motive for crime.

His more immediate goal is to find the funding to make a feature length film of his techno-utopian lifestyle so his theories can reach a mass audience.

The May-June issue of The Futurist, which reviews Frescoes book calls him “a visionary engineer” and whether the future he envisions “is probable or even possible is open to debate, but he succeeds in conveying the power of thinking of the future on a grander scale.”

Drexel University sociology professor Arthur Shostak has used many of Fresco’s ideas in his classes.

“His contribution to futuristics is singular, as few, if any around the globe, dare to sweep, the depth, and the drama of his vision. When he writes or speaks, futurists grow quiet, pensive, and finally, appreciate – as his work, however one might differ on the details, is a sound in its call for a third examination of the assumptions under which we labor,” says Shostak. “While little of his vision may materialize in the lifetime of us all, our grandchildren may yet salute much of what Jacque first help them set in motion.”

The industrial engineer’s ideas have been featured most recently on the Discovery Channel’s two-hour special Engineering the Impossible and The Weekly Reader, which circulates nationally in classrooms. Fresco and his partner of 26 years, Roxanne Meadows, received more than 1000 letters, most of them from children asking if they could move to Fresco’s brave new world.

Fresco has been delighting those with a longing for utopia and a taste for technology for decade —  including designing cities in the sea and a time-saving low-repair, 31-part car.

What sets apart his vision from other futurists might be his engineering background, which allows him to build, or tried to explain how to build, many of the technological wonders he says will free mankind from the mundane work that keeps us focused on small pursuits rather than self-improvement in the betterment of the world.

“For a woman to spend the best years of her life typing out the same old letters or standing behind a counter waiting for someone to buy something is a horrible waste of the mind,” Fresco says.”The technology already exists to do away with most of these kinds of jobs.”

Fresco says “cybernation” – the wedding of the computer to production – doesn’t go as far as it could today because it will eliminate hundreds of thousands of jobs, and that possibly scares people.

“It will probably take some kind of economic or environmental catastrophe to get people to turn to something else,” says Fresco. “I’m not wishing for either, but it seems inevitable.”

Born in Manhattan in 1916, when fire engines were still drawn by horses, Fresco says his interest in creating a dramatically different social order emerged from the heartaches of the Great Depression. It was a time when, from one week to the next and without the natural world and its resource changing an iota, the fall of the monitor system left families hungry and jobless.

Fresco began to read books like Edward Bellamy’s Looking Backward and started to develop his own blueprints for a culture based on values and resources. His father was an agriculturist, So Fresco grew up knowing of nature’s bounty if properly harnessed. He worked many jobs, designing aircraft, movie special effects and developing medical devices.

“Every revolutionary idea was laughed at, at first,” says Fresco. “The Wright brothers were bicycle mechanics. Alexander Graham Bell wasn’t an electrical engineer, he was a phoneticist. All real innovations come from outsiders – it rarely comes from institutions.”

Fresco’s Venus lab, about 12 miles from Palmdale, is visited by those interested in his philosophies, as well as nearby schoolchildren. It’s filled with scale models of his circular cities, modular home housing and cities in the sea. He uses the expertly crafted models made by his artist partner Meadows to make movies he sells to high school teachers and university professors intrigued by his ideas.

The tapes and books, and that models Meadows creates of commercial real estate projects, provide the couple income to keep their hope of finding a major backer for the Venus Project alive.

“We know people are hungry for a new way of life by the letters we get. They right to us and say, ‘I thought we were alone.’ We give new hope for the world because it’s a specific plan, not just verbal rhetoric.”

“It’s time to consider our values and our outlook. I cannot predict what the future will be – only what it could be.” Jacque Fresco