The Venus Project’s Showcase Of Things To Come 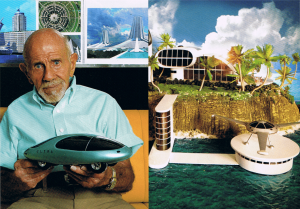 Jacque Fresco has been envisioning the future for nearly a century. He’s an inventor, artist, and industrial and architectural designer who holds more than 100 patents. The 92-year-old is a master of out-of-the-box thinking, and one need look no further than the Venus Project, located in Central Florida. It is comprised of plans, hundreds of scale models and 10 completed dome structures with decidedly mod 1960s feel nestled among flower gardens, bridges, ponds, streams and hundreds of palms. Fresco and his longtime partner, Roxanne Meadows, build the culmination of his life’s work, the 21-acre research facility in Venus, Fla. The project has been thirty years in the making and serves as an architectural model for sustainable living.

The Venus Project integrates the best of science, technology and art into comprehensive plan for a society based on human and environmental concerns. Over the years, Fresco has designed works that address society’s basic problems including noiseless and pollution-free aircraft, and the aluminum siding that became all the rage in the 1950s. This and other achievements have earned him a following among innovators both young and old, some who compare the inventor to Nicola Tesla and other relatively obscure but prolific pioneers.

Fresco uses the property as a lab an example of how to live. “What is needed is a positive vision of what the future can be if planned in accordance with the carrying capacity of the Earth,” he says. His architectural designs maximize the Earth’s natural resources and energy. Fresco feels the Venus Project is feasible. “It doesn’t reflect the dreams of an impractical idealist,” he says. ” instead, he presents obtainable goals requiring only the intelligent application of what we already know. The only limitations are those we impose upon ourselves.”

The property is currently for sale as Fresco and his partner have been invited to build a Museum of the Future in Turkey and potentially an experimental city. Perhaps, at 92, this futurist is just beginning his biggest project yet.