ORMOND BEACH – It sounds almost like a fantasy: a high-tech society where everyone has everything they need.

But to Jacque Fresco – inventor, architect, engineer, futurist – it is an attainable dream.

“The world I’m thinking about is not ‘1984.’ It is not a brave new world. It’s a world where science technology is used first to improve human lives,” Fresco said.

The 81-year-old resident of Venus, south west of Lake Placid, shared his vision Sunday with about 60 area residents at the Unitarian Universalist Society in Ormond Beach.

Fresco believes the world’s current monetary and political systems will break down as automation reduces the need for a workforce.

As that happens, the countries of the world will need to work together to use resources to the good of all, she said.

That’s where The Venus Project comes in.

Fresco and his assistant, Roxanne Meadows, conceive of self-sufficient cities arranged in circular patterns around huge domes outfitted with computers that monitor cities and people around the world.

The large dome at the center of each city would be surrounded by libraries and art, science and cultural centers. Residents would be able to check out not only books, but also musical instruments, bicycles, cameras and microscopes. The circle what also include belts of apartments and houses, recreation areas, waterways and agricultural fields. 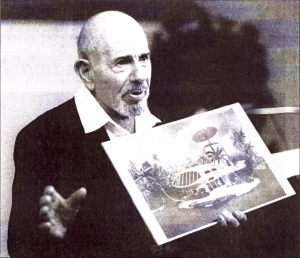 Jacque Fresco shows an example of his vision of the future to the nearly 60 area residents who came to his lecture Sunday at the Universalist Society in Ormond Beach.

Other “cities” would be on ocean platforms.

Systems for every facet of living would use the latest technology. Decision-making – and therefore government and politics – would be unnecessary because society would be based on science, Fresco said.

Fresco’s theory is that if everyone has everything they need there will be no crime, no war, no poverty. The ultimate goal is to change the social system.

“There’s no such thing as Utopia. We don’t promise perfection, but it’s a helluva lot better then the way society operates today,” he said.

Fresco and Meadows are developing a prototype of a futuristic city with streamlined, domed homes on 25 acres in Venus, which is south of Lake Placid in Highlands County.

Flagler Beach resident Bob Blume, who attended Fresco’s lecture Sunday, is intrigued by the idea. But she wonders if more thought should be given to the human element.

“He certainly has got a handle on the engineering end of it. But I don’t think he’s thought enough about the decision-making and political ends of it because I don’t think we will ever have a society where people don’t disagree,” Blume said.

Ironically, Fresco’s project is going to rely on the capitalistic society to get off the ground. He hopes to build a theme park and produce a major motion picture, called “Welcome to the Future,” to fund the first experimental city.

Recent tornado damage in New Smyrna Beach points up on a need for a change in thinking in our perception of desirable building design.

Weather patterns are becoming more erratic and unstable. We cannot afford to thumbs our noses at Mother anymore. 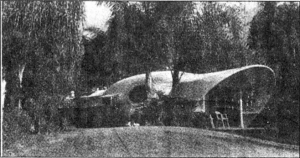 Dome built on research center of The Venus Project in Venus, Fla.

Domes of reinforced, foamed concrete are beginning to make more and more sense. While we cling to outmoded concepts of square corners, pitched roofs, and columned porticoes, our present construction methods are fraught with potential missiles, disasters waiting to happen. Small wonder we consider 100-year-old conventional structures historic. They’ve managed to duck the odds so far. But they’re all living on borrowed time. Domes, on the other hand, will be here for hundreds, even thousands of years.

Jacque Fresco, a design engineer and social innovator in South Florida, has built a small complex of domes as a prototype for a community of the future. They have come through Hurricane Andrew and several other wet, windy situations without a scratch. Likewise, a beachfront dome house in South Carolina withstood all Hurricane Hugo had to dish out while its neighbors were dashed to kindling.

With current construction techniques, and the cost of dome construction is comparable to, even slightly below, that of conventional housing. The interior can be as homey and rustic as a sodbuster’s cabin – or as sleek as a space shuttle. The foamed concrete shells are also highly energy-efficient. And forget roof repairs.

Insurance companies should be the first on the dome bandwagon, with generous discounts to those considering dome construction. State, county and local governments should do everything in their power to encourage it. If they failed to do so and something comes crashing in on someone, the calamity is on their heads.

Like it or not, this times in this weather, they are achangin’. No species that fails to adapt to its environment survives for long. We of all species have the capacity to think proactively, if we would just use that one most critical part of our bodies that nature tucked away in the most secure area – beneath the dome of our skulls.