A vision is to a business as a lighthouse is to a ship at sea — a signpost and a guideline for future direction. A utopia can be roughly the same thing, albeit on quite another scale. A utopia describes a future society that is substantially different from the present. Thus, it distinguishes itself from a vision in its magnitude and in its radical nature.

Utopia comes from Greek. U = ‘no’ + topos = ‘place’, so ‘utopia’ means a non-existing place. ”This is utopian,” we say, meaning that something is far-fetched and unrealis­tic. In this way, the concept of utopia has become part of our daily language and influences the way we think. 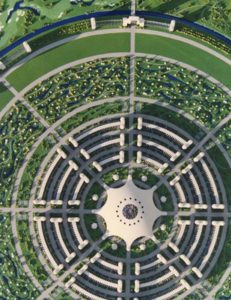 However, it is worth noting that utopias are not always unrealistic, nor does the original meaning of the word imply they should be. On occasion, they could easily be realized, if we could just agree to do so. In his article “The Difference Between Utopias and Visions — and the Fear of the Totalitarian Nature of the Utopia”, on page 9, Martin Kruse writes about the realistic utopia, and in particular the origin of the utopia in the history of ideas. Read it to learn more about what a utopia really is.

Perhaps the modern interpretation of the word ‘uto­pia’ is to blame when the Renaissance man and futurist Jacque Fresco says in the article on page 15 that he doesn’t want to call his life work, The Venus Project, a utopia. However, this visionary idea of a future society has many characteristics in common with the utopia. As Nikolina Olsen­Rude points out in her article, page 37, the word utopia carries a double meaning, since in Greek it can mean both the good place (eutopia) and the non­ existing place (outopia). A good place is precisely what Fresco has devoted his life to describing and fighting for. Read more about his ideas in the article and see the futuristic photos of the project that Fresco and his wife, Roxanne Meadows, have kindly allowed us to print.