With the vision of a futurist, the know-how of an engineer, and the soul of a philanthropist, in his new book author Jacque Fresco proposes a fascinating world beyond politics, poverty, and war. The Best That Money Can’t Buy takes the reader from the world as we know it to a world that at first glance seems fanciful and impossible, but one Fresco says is coming whether we believe it or not – or like it or not.

From his Venus Project of several domed building set in the rural woods of a sprawling unincorporated part of Highlands County, he looks at the world that we’ve all seen – the images captured by cameras in space. These show us the beautiful blues, whites, and greens of this planet’s natural system – the oceans, lakes, and rivers, the clouds, the forest and farmlands. And the farther away from Earth the pictures are taken, the smaller the planet seems.

At the heart of the Venus Project, the planet is a model plugged into a worldwide Web that allows anyone with a computer to know – at nearly the speed of light – the situation anywhere.

In his new book, Fresco echoes the words of many astronauts who have return to earth. They come home with a new appreciation for what he calls “global consciousness.” It is the new sense that ours is a “grand global awakening to the realization that all the people who share our planet makeup one, single community of brothers and sisters.”

The notion that someday planet earth will be one united world bothers many people who are stuck in a vision of a single currency, a single language, and all of this held together by the rule of some future dictator – a world without personal choice our freedom.

But this old one world vision, the one many people have contemplated and argued about, is not Fresco’s.

No, it’s not even close to his, because the traditional one world notion still puts money at the center, not the planet itself. And as long as the money chase goes on, earth will be the stage on which continues endlessly the insanity that has threatened many times to destroy civilization.

Until then, fresco believes we will continue to add more senseless stories as the world’s historians go on chronicling the “insanity” that has marked every generation since history began. 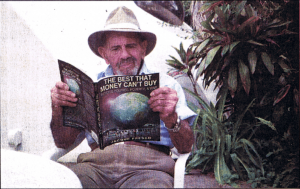 At his home in Venus, author and futurist Jacque Fresco skims his recently published book, ‘The Best That Money Can’t Buy.’

“Despite the vision and hope of astronauts, poets, writers, and visionaries the reality is that nations are continuously at war with one another, while poverty and hunger still prevail in many places throughout the world, including the United States.”

If the prophet is not without honor in his own neighborhood, no less Fresco. Mostly unknown to people around him, he’s quiet, unobtrusive life in rural Venus reveals much of his career and his international fame.

A pioneer in industrial design, his work has produced prefabricated houses, automobiles, and hundreds of products.

The U.S.Air Force knows him well for his patent and aircraft wing system, and the medical world knows him for his three-dimensional X-ray units and electronic surgical instruments.

He holds several patents, including systems for noiseless and pollution-free aircraft.

Ask technical advisor for the motion picture industry, he even discovered a way to view three-dimensional movies without using glasses.

Television viewers have seen him on the Larry King Show and learned about the Venus Project on the Discovery Channel.

University students at Princeton, South Carolina, and Columbia and other schools throughout the country know him, too.

At 85 years old, Fresco – with the assistance of his good friend, architect and designer Roxanne Meadows – continues to build models, working versions for a world system based on resources instead of money.

“No one can actually foretell the future in education, science, and technology with precision,” Fresco admitted. After all, there are too many variables. However, one thing we can know for certain, he said, that scarcity-based economy of the traditional world system faces a sunset.

Especially in a world where scarcity is contrived in order to make money.