Home » Latest News » Ulyces: This futuristic city project is perhaps the key to a world without money

Born of the imagination of the futurist architect Jacque Fresco, the Venus Project is the promise of an urbanized society from which the money would have disappeared.

Apple Park’s work is not yet complete, but the 12,000 employees of the famous apple firm are starting to take over their new offices in Cupertino, California. In all, the move is expected to take six months. The last major project of Steve Jobs, the Apple Park is a monument that is distinguished by its circular shape and extends over 260,000 m 2 . Designed by architect Norman Foster , it cost five billion dollars. Its energy supply is mainly ensured by the solar panels installed on its roofs, and 80% of the area is covered with trees and greenery.

Once completed, Apple Park will evoke a utopian future, which holds much of the circular city imagined by architect Jacque Fresco, who died on May 18 at the age of 101 years. Often called a ”  dreamer  “, when others called him ”  charlatan,  ” he claimed that a world without money was possible thanks to the help of technology and science. And he spent his very long life trying to prove it. His work, rewarded by the United Nations in July 2016, attracted different personalities.

The borders have been abolished. The monetary system too. As a result, poverty and violence no longer exist. Laws are no longer necessary. Human beings, who are no longer obliged to work to satisfy their primary needs, devote their energy and creativity to study, art, and innovation. They live again in harmony with nature. But they have quality habitats, efficient means of transport, education and medical care of very high level. Here is the world that Jacque Fresco wanted.

The founder of the American Transhumanist Party Zoltan Istvan  met him at his research and experimental center in Florida in October 2016. It was named Venus Project in reference to the nearby town of Venus and was built at The end of the 1970s. Accessed by a cracked and deserted road. A white barrier then opens onto a park of eight hectares. Planted with tropical trees, it houses raccoons, crocodiles, and small half-spherical constructions. Inside, the work of Jacque Fresco is exposed.

”  I have seen remarkable architectural drawings and models of futuristic cities  ,” says Zoltan Istvan. ”  I instantly became one of his fans. Jacque was a very, very good person. One can not say many humans that they are basically good people, but Jacque was one of them. He really wanted what was best for humanity.  ”

And there is nothing better for humanity than a “resource-  based economy  “. Developed throughout its conferences, seminars, articles and books, this model is the keystone of Jacque Fresco’s philosophy. It is based on the idea that if we do not have enough money to feed, house, care for and educate everyone, we have enough resources. And advocates the distribution of these resources in an efficient and equitable way without going through money, barter, credit or labor. In this system, which can be compared to that of a public library, all goods and services are accessible to all, free of charge. What makes the concept of property obsolete, and at the same time eradicates the notion of theft. 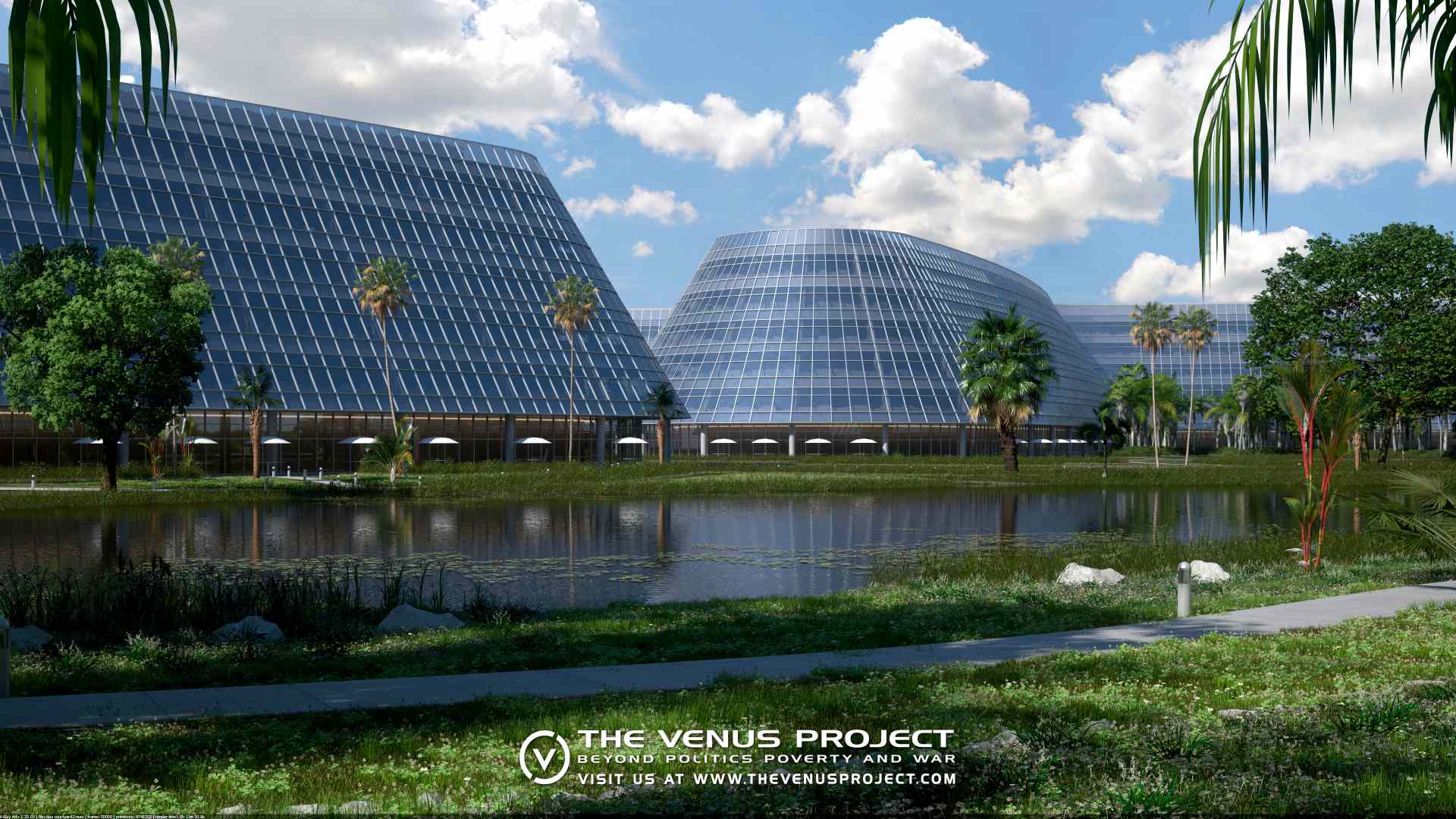 Such a system is only possible if resources are produced in abundance. And this is where science and technology, according to Jacque Fresco, must come into action. ”  If we used our technology to produce abundance, the assets would become too cheap to be monetized,  ” says colleague Roxanne Meadows . ”  There is no price for things that are abundant. For example, air is a necessity but we do not regulate or monetize the amount of air breathed. The air is abundant. If the apple trees were growing in abundance, we could not sell apples. “But this air and apples must also be of good quality, hence the importance of preserving our environment by developing clean energies.

Only then will humanity be able to overcome the problems it faces today – global warming, pollution, famine, disease, wars and territorial disputes. ”  There are no ethnic, religious or gender problems, there are only human problems,  ” said Jacque Fresco, who logically advocated for nations to dissolve and for people to move freely through the world. ”  If you want the end of the war, you must proclaim that the Earth is a common heritage  ,” he insists in Roxanne Meadows’ documentary Paradise and Oblivion .

For entrepreneur Jonathan Kolber, his system is interesting but he forgets how to move from capitalism to the resource-based economy. ”  Capitalism is continuing by automating more and more jobs on which consumption depends. There is no way to stop or even slow down this process  , “he said . For his part, Zoltan Istvan believes that ”  the resource-based economy is a romantic idea, and it would take several decades to try to implement it  .”  ”  Moreover  ” , he said, ”  the economy based on resources involves more robotics and automation that we have now,

Born in Brooklyn in 1916, Jacque Fresco has always been interested in what the future holds for us. He began drawing at the age of eight. And finds a source of inspiration in the science fiction film  Metropolis . ”  It portrayed the future as a highly regulated system, which is totally unacceptable, but architecture was interesting, as was robotics,  ” he explains in the documentary of US director William Gazecki, Future by Design . The little boy imagines underwater homes, runways on the roof of post offices, ships and planes. Having become an extremely brilliant schoolboy, he shows his drawings to an engineer who, impressed,

At about the same time, Jacque Fresco accidentally fell on Albert Einstein at the exit of a New York cinema. He begs him to give him an interview, and the eminent mathematician agrees to receive him at Princeton University. Asked about his vision of economic and social organization, he takes a little water and tries a microscope to the teenager to observe the merciless struggle that the various organizations that compose it. ”  That’s how nature works,  ” says Albert Einstein. ”  And it is also in this way that a society works. Jacque Fresco then has the guts to express his deep disagreement.

He himself was traumatized by the economic crisis of 1929. ”  From one day to the next, he found himself surrounded by misery and suffering,  ” says William Gazecki. ”  People’s resources, infrastructure and skills were the same. And yet, they had lost everything and their suffering was unbearable for Jacque Fresco. “Henceforth, convinced that capitalism is absurd, seeks an alternative to communism and socialism before estimating that the systems advocated by these ideologies would not be more effective.

Jacque Fresco stops the school very young and leaves to travel around the world. He is amazed by the diversity of cultures, customs and values ​​- and convinces himself that human beings are shaped by their social environment. ”  Imagine a family from ancient Rome taking their children to see Christians given to the lions for food, and the children say,” Dad, will we be able to come back and see the Christians get eaten by the lions next week? ” Are children sick? No ! It is their system of values ​​that is distorted. So I’m only interested in the environment in which people are raised. If this environment is inadequate, their behavior will be too.  ”

Back in his country, Jacque Fresco works for the airline company Douglas Aircraft Company. And when the base of Pearl Harbor was attacked, on December 7, 1941, he joined the Air Force. The Second World War left the United States with overcapacity in production and housing. Fresco therefore designs a house entirely made of glass and aluminum, which can be built quickly and at low cost. Ten men could erect its structure in just eight hours. Known as Trend Home, it is made in mass and provides some professional recognition to Jacque Fresco.

But his ambitions as an architect are obviously not limited to housing. It was in the 1970s that he conceived an entire city and presented it on radio and television. At the same time, he founded a small association, Sociocyberneering Inc., and met Roxanne Meadows. Together they seek to acquire land in Florida to build a futuristic research center and eventually settle on a tomato plantation next to Venus.

The circular city imagined and modeled by Jacque Fresco is organized around a powerful computer in charge of controlling the quality of water and air, maintaining safety and environmental balance. This computer is located under a huge dome containing all the goods and services that the inhabitants can use for free: food, medical equipment, care, education. And the circular shape was not chosen at random. According to Fresco, which relied on its numerous architectural models to demonstrate it, it brings each quarter closer to the central dome.

The stated objective of the Venus Project is to make these models a reality in order to prove to the world that the resource-based economy so dear to Jacque Fresco is not a utopia, at least on a city scale . As for the research and experimentation center itself, it is supposed to represent the surroundings of the ideal city of Fresco, while showing that technology and nature can harmoniously coexist. Surrounded by tropical trees and wild animals, the buildings dotting the park are not visible, for example, from one to the other. The Venus Project has also allowed Jacque Fresco to develop other urban models, including aquatic cities, that would reduce population pressure on land and promote ocean conservation by promoting their study.

” The idea of ​​an experimental city is realistic  ,” says Zoltan Istvan. ” Knowing if the whole world would embrace the theory of the resource-based economy is something else, but an experimental city could lead the way and partly answer that question.  However, this single undertaking requires considerable financial investment and a call for donations has been launched. Hence the importance, for Jacque Fresco and Roxanne Meadows, of making their work known through documentary films. That of Meadows,  Paradise or Oblivion , has been viewed almost 2.5 million times on YouTube.

The call for donations has been a source of criticism. Asking for money to lay the foundations of a world without money can indeed seem incoherent. But for William Gazecki, Jacque Fresco can not be accused of fraud: ”  He was not interested in either power or material possessions, and he led a very simple life.  So he and Roxanne Meadows would have simply been pragmatic. They have for a long time financed their research by making models for architectural firms, or for medical equipment firms. And the most curious must pay the sum of 200 dollars to be able to visit the center of Venus, which is directed by Meadows since the death of Fresco. Aged 67,

”  As a co-founder of the Venus Project, I will devote more of my time and energy to the task, as Jacque and I have always planned,  ” she wrote in a letter published on the Center’s website . ”  Many others want to help me reap the rewards of our work and that is exactly what a very dedicated group of people does.  The Venus Project will pursue our goals and proposals, and as Jacque and I always say: “If you want a better world you have to work on it. If you do nothing, nothing will change. “  ”