In the first 30 years of my life architecture and art never impressed me. The art museums were not among my favorite destinations because I was never exposed to them in a relevant context. So, it is interesting to reflect on that, and at the same time be excited about an art museum exhibit. The Baker Museum features Jacque Fresco – 100 years of vision between November 19th, 2016 and April 16th, 2017 in Naples, Florida. Below, I share my impressions and thoughts of the exhibit in the context of Jacque’s life.

Given the numerous contributions of Jacque Fresco to architecture, design and functional art I feel it has been long overdue to acknowledge his work in an exhibit. Still, I find it unfortunate that this recognition came so late in his life. This is undoubtedly a result of the less traveled path that he took. My impression is, that he never catered to people’s opinions, never looked for recognition, never backed down from presenting facts and never bent his values to serve himself. Jacque’s motivation was always solving problems, learning how natural processes work and designing a system that would feed, house, educate and take care of everyone on the planet.

That seems a tall order for anyone because I am not aware of a comprehensive plan that has gone beyond the philosophical stage, a good example of which is Plato’s Republic. On the other hand, Jacque never seems to back down from a problem just because it is difficult, takes long or takes him against the grain of the whole established culture. I was impressed by how well this was outlined by the exhibit in the museum. I feel that the museum curator, Silvia Perea, did a remarkable job of presenting Jacque’s social aspirations and struggles with accepting the status quo. For a museum that focuses on art, this could not have been easy for her as I did not recognize any kind of social context in the other exhibits in the museum at the time of my visit.

Since the Baker museum has many exhibits displayed at all times, I feel it was unrealistic to expect that half of the museum would be dedicated to Jacque – although I surely wouldn’t mind – but the size of the exhibit seems to be more than adequate. The first thing that caught my eye when I stepped into the exhibit room was an introductory write up on the wall at the entrance which set the tone for the whole exhibit. 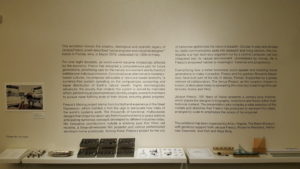 Opening wall of the exhibit

This exhibition honors the creative, ideological and scientific legacy of Jacque Fresco, a self-described “social engineer, and industrial designer” based in Florida, who, in March 2016, celebrated his 100th birthday.

For over eight decades, as world events became increasingly affected by the economy, Fresco has designed a comprehensive plan for future generations, prioritizing care for the natural environment and humanity’s welfare over individual interests. Conceived as an alternative to monetary based cultures, his proposal advocates a “resource based economy”, a currency-free system operating on computerized accounting and equal distribution of Earth’s natural wealth. Highly technologically advanced, the society that inhabits this system is served by machines which, performing all jobs traditionally done by people, enable its members to pursue more fulfilling ends of their choice, ensuring global progress.

Jacque Fresco – 100 years of vision, presents a century-long timeline, which places the designer’s biography, inventions, and thesis within their historical context. The presentation also includes a wide selection of the models and sketches that Fresco has produced to represent his ideas, arranged by scale to emphasize the scope of the proposal

3 of 7 paragraphs from the wall at the entrance of the exhibit
By Silvia Perrea, Baker museum curator

The diversity of models in the exhibit demonstrates how Jacque used shapes he found to be effective in nature. With a knowledge of nature’s mechanisms, creations, and evolution, as well as the knowledge of the sequential development of ideas and technologies, he found designing and fabricating very easy. Due to this early start and productivity, the amount of his work is extensive. It ranges across plethora of different disciplines, resulting in designs of medical instruments, buildings, cities, boats, drawing utensils, cars, space stations, planes and other transportation vehicles and the automated machinery to build much of the above mentioned. The result is a blueprint to redesigning the culture and ultimately the world that we live in.

The work put into the fabrication of these models is staggering and hard to imagine in today’s culture of computer design and 3D printing. Each of these models is produced by hand using a variety of materials such as plastics and ceramics. In the exhibit, it becomes clear that while the models were made between 1980 and 2010, the drawings and designs are 60, 70 or even 80 years old. I find it unfortunate that after all this time, many of the designs and principles are still not utilized in today’s culture. Many people claim that Jacque Fresco was, and still is, ahead of his time. It seems to me, though, the culture was and still is, far behind the technical capabilities of the time. Examples of this are the fact that solar power concentrator energy production technology has been available since 1878 and electric cars were developed in the late 1800s. Both of these technologies were pushed aside by the monetarily cheaper coal, oil and gas alternatives. Jacque, however, was not like so many of us who were pulled back by the culture. He was not molded by the same “machine”. Due to his influences and circumstances, he developed his potential by reading and experimenting on his own. 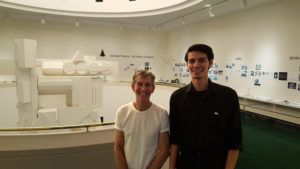 Particularly impressive for me was the timeline of Jacque’s life, that is very detailed and well made. I have been a volunteer for the last six years, I have gone through all available materials online at least once and I still found many fascinating details that I wasn’t aware of and pictures I have not seen. While three walls of the timeline at first glance do not seem like a lot, reading through everything actually takes about three to four hours. In my opinion, a lot for an art exhibit.

In preparation for this exhibit, Roxanne Meadows, and Joel Holt did hours and hours of work in a total of three months of preparation. I admire the above-mentioned work of curator Silvia, traveling multiple times to the research center in Florida and gathering information on Jacque and the project. Roxanne played an integral role in each of the visits, describing the drawings, models, what they were made of, when they were built and who produced them. Nathanael Dinwiddie’s previous archiving work and consultations on information also proved invaluable to allow for easier access to the information and documentation necessary to create the timeline of Jacque’s life. Nathanael’s years of dedication on digitizing so much of Jacque’s records allowed the transfer of relevant information utilizing emails and therefore speeding up the process considerably. 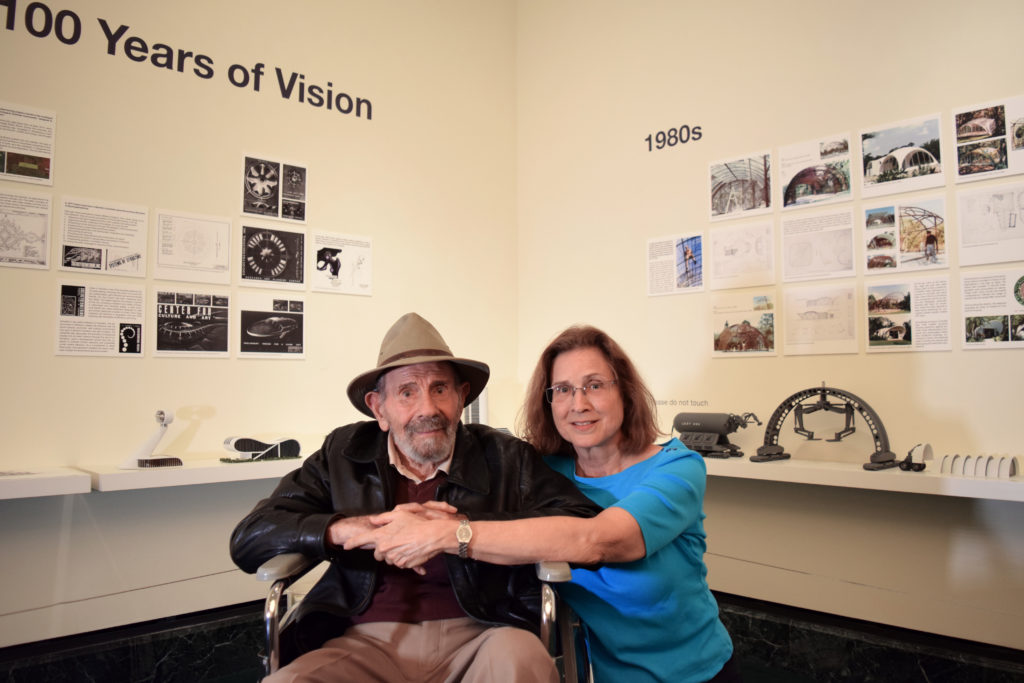 Jacque and Roxanne visiting the exhibit on the day of the opening.

I hope that other museums will also find the exhibit relevant and it would be great to see it displayed elsewhere. That would continue the recognition and perhaps make new connections with people and organizations to move The Venus Project closer to achieving their goals. I consider the fact that the Baker Museum features Jacque Fresco among their exhibits to be a great achievement.

Finally, I thank Jacque Fresco for compressing his life experience and knowledge of all the disciplines he studied into a comprehensive plan for a redesign of our culture. I consider myself fortunate to have had the opportunity to learn from him magnitudes faster than my own experience would have allowed. I am even luckier to be able to actually get to know him and Roxanne and consider these amazing human beings a part of my life. Jacque dedicated his life to the pursuit of a better life for all inhabitants of Earth and Roxanne has done the same for the last 40 years. It is now up to us to step up, educate ourselves and dedicate our efforts to make this vision into reality.